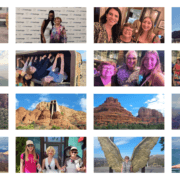 I must admit I am a total novice at travel, but Sedona, Arizona, had been on my bucket list for many a year.

LifeVantage wanted to share some kudos with Poppy & me and we were invited to their 2022 Convention. This year it was held in Arizona, Phoenix – oh wow – so grateful to be invited, and dreams do come true thank you, LifeVantage.

And we set off on our travels.

33 hours after leaving Christchurch, we arrived at our Phoenix hotel (we had a long delay in LA because our air hostesses had flown into another terminal whose security system had shut it down, and they couldn’t get out).

The day was almost finished when we arrived at our hotel. Our hotel’s architecture Art Deco so beautiful, and was originally a combined wellness center & a bank but when the bank shifted out the building fell into disrepair and only a few years ago it became a hotel and was restored, stepping through the doors was stepping back in time. We had a quick shower and change of clothes, which made me feel like a new me, and we had a walk around downtime Phoenix as we needed to feed ourselves, and we shared a woodfired Margherita Pizza & picked up some organic fruit from a supermarket.  Impressions of downtime Phoenix love the vibe and the cleanliness, and the cacti vegetation.  Arizona is home to 51 native species of Cacti, and the giant Cacti, the Saguaros, reach over 50 feet tall with arms spread out, and we were told they are only found in Arizona & in the neighbouring southern state of Sonora, Mexico.

I woke with the birds, excited as can be. Poppy had a decent sleep in, and we had breakfast at the hotel, and then we registered for Convention. Again we walked around downtown Phoenix, and late morning we visited Amazon Mills [shopping mall] to check out the shops and walked innocently into a pet shop to look at animal toys & accessories, now the pet shop was spotlessly clean, but at least 60 different puppies were on show behind glass windows, pedigree & designer dogs.

That evening, we had our celebration dinner with Corporate and other distributors from Australia, Hawaii, Puerto Ricco, and Thailand – maybe 30 of us in total – heaps of fun.

The first day of Convention started with a party atmosphere, and inspiring speakers took to the stage. And we were part of the select attendees that were invited to have lunch with the keynote speaker Dr Deshauna Barber (Former Miss USA 2017, Award Winning Motivational Speaker, who has done so much for soldiers suffering from PTSD).

Phoenix has two Convention Centers facing each other, and that evening, the street between the two Centers was shut off for our own street desert party – street food, live music/dancing, and games.

2nd day, up early as LifeVantage had organised a Sunrise Hot Air Balloon Trip over Phoenix for us – hey hot air balloon trip had been on my bucket list since I was a kid. And we greeted the sunrise with our hearts in the sky – was I scared yes, and that lasted for less than a minute, the trip was so still and surreal but plenty of laughter due to the other folks in our balloon. We arrived back at Convention, and the morning session was well underway with our Australia & NZ Corporate folks acting as MC’s, and they added the down-under ambiance – so special. Because we arrived back after Convention started I missed Claire Duke, our Australia & NZ Marketing Manager, chatting about me on stage, but I listened to the recording yesterday and felt very honoured and valued.

At the end of the Convention, Kiwis & Australians were invited to nibbles & drinks with some of our Corporate folks Claire, KitKat, and Pamela, and we were also invited to a few after-convention parties; we found our way to one, but we didn’t stay as we had another early start as we were going to visit Sedona.

Sedona was waiting for us, I cannot describe what I was experiencing, it was so beautiful and spoke to my heart, and at times tears were so close due to the surrealness and the beauty and the energy. Poppy was wired with all the energy and turned into an energising bunny.  We bumped into our LifeVantage Corporate folks Claire & Pamela so special as we had spent the previous evening with them.

Comment from Poppy, you didn’t tell me Sedona would be like this. I don’t want to leave.  I did tell her but proves that kids, regardless of age, don’t listen to their parents!!!

Temperatures Phoenix was HOT, Sedona was brisk, and what about Grand Canyon well, there was snow on the ground.

Grand Canyon I’m not going to prattle on too much other than to use one word, ‘grandioso’, no I will prattle on the light played out on the Canyon, and the time we left Grand Canyon was at sunset with the sun setting and the canyon ablaze with colour.

Flying out of Phoenix to LA, again, our plane was delayed, Delta Airlines had to find a new aircraft due to a technical engine fault.  We expected to arrive in LA around lunchtime, but it was closer to dinner time.  I had left the LA hotel booking to Poppy, and the hotel she had booked us in rated well, but on arriving at the hotel, we decided it wasn’t us, and we hightailed out of there.

And we parked ourselves at a safer hotel, and it was now around 8 pm,  Hollywood Boulevard was about a 5-minute walk away, we were told it was safe to go out at this time of night but wouldn’t be safe to walk around after 11 pm, again we set off to find food and to investigate the Walk of Fame, and we were hit with the starkness brutality sadness of LA – homeless people – drug-fueled people sprawled over the pavement in all directions – incredibly sad.  City of glamour, city of lost angels.  We were both overwhelmed by it all, we are both sensitive to energies.

Poppy, on returning to our hotel, told me we are going to get out of LA and get ourselves home, and she started to check out flights back to NZ, and none were available for days.  And I did fall asleep, but before falling asleep put out the intention that tomorrow would up be a better day.

Woke up, will we hide away in our hotel room for the next 4 days or venture out, I decided to venture out and booked us into Universal Studio. I hadn’t intended to visit Universal Studios but  it was a 10-minute drive from our hotel, and we could get tickets so that sealed it.  Universal Studio I would visit again, super fantastic experience, and made up for our yesterday.

The next day we went for a 5-hour tour around LA, we were lucky we had the right tour guy, and it was his own business, on our tour with us was a family of 4. We visited the Griffith Observatory, which is one of the best vantage points for seeing the Hollywood Sign, Capitol Records Tower, Sunset Blvd, West Hollywood, Film Locations, Beverly Hills Rodeo Drive, Celebrity Homes, and lunch at the Farmers Market.  And we even got to see a robot whizzing down a street with food onboard (areas of Hollywood has food delivery robots).

After the tour, we returned to our hotel around 3 pm and decided we would visit the shops at Citadel Outlets as they were open till 9 pm (Poppy loves window shopping) waiting for our uber in the hotel carpark LA Police arrived in force I was wondering if there was a bomb scare or some serious crime had taken place but on asking the valet what was up, and he said a celebrity is staying due to the Black Panther 2 Premiere happening down the road and the police are doing their job.

After being dragged around Citadel’s 130 stores, we dined at an American Diner, and it was so cool, their Apple Pie was out of this world!!!

Woke up at a reasonable time, and what to do today, let’s go to Disneyland. I’m glad we went for many different reasons, one of my reasons my Sundays as a child, we would have a special family dinner, and we would as a family watch Walt Disney, and depending on the time of year and the Disney show the neighborhood kids would come together and play out whatever had been on our tv screens.  Now you shouldn’t compare experiences, but I am going to compare Disneyland to Universal Studio – Universal Studio outshines Disneyland. The highlight of Disneyland for me was the last shop we walked in, and it was a shop of Princess dresses where little girls would pick their dream Princess dress, and then they would have a beautician turning them into their favourite Princess, the little Princesses eyes sparkled, and their sparkles were infectious. And because we enjoyed the American Diner, we stopped there on the way back to the hotel.

On our last day in LA, we were flying out at 8.55 pm, our hotel said we could leave our bags with them, and we had another walk to Hollywood Boulevard but what to do for the rest of the day, let’s go to Santa Monica. On arriving at the pier we got to watch amazing dancers and the beach is stunning. We had an early lunch on the pier soaking up the scenery & relaxing and meet a lovely couple from Tasmania that were catching the same flight as us.  Because we thought we had hours to spare, we went for a walk to Venice Beach, a breathtaking beach, but every park bench seat was bagged by a homeless person; I love sea air, who doesn’t but the sea air was buffed out by the smell of cannabis – cannabis is legal in California and in some other USA states.

On the trip back to our hotel to retrieve our bags, we got caught in traffic jams, we finally got to the hotel, and ordered an uber to take us to the airport, and again we got caught up in the traffic the traffic was not going anywhere, luckily for us, we had the best uber driver, who lived out by the airport, and he drove the routes his GPS was not advising him to go, and we arrived in time.

USA uber drivers are amazing, they open car doors for you, load your bags for you, and nothing is too much trouble.

Now this one surprised me, every person that asked us where we were from, and there were many, but every single person knew where New Zealand was, and their response was New Zealand is their dream destination and if they had visited they would share that it had been their best ever overseas holiday.

And hey, maybe French Bulldogs are the most popular dog breed in LA, as the majority of people we saw out and about with dogs were with French Bulldogs.

The growth & healing I experienced because of Convention, an opportunity to meet up in person with people that I already knew but also an opportunity to build new relationships, of having quality time with Poppy, also the expansiveness in myself from visiting a little bit of USA of fulfilling dreams, I am so appreciative for the experiences. I have so much appreciation for all that New Zealand has, embracing all the USA experiences, embracing being back in New Zealand.

Dreams do come true, create your bucket list, and it will happen!!!  And who could ever imagine, because I am so passionate about supporting people and their animals with their well-being that LV offered us an opportunity of a lifetime, to support me in my growth & that I got to share it with my one and only daughter.