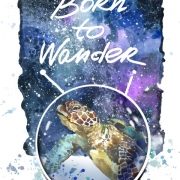 Turtles are amazing land/sea animals, not quite of this world – they are so unique in how they are.

To be able to carry your house on your back doesn’t this make complete sense! To be able to stand up and uproot yourself whenever you wish and that all your possessions are contained on oneself. This is the message Turtles wish to spread to humans.

The Turtles message is about self-containment. Now isn’t that a strange thing to suggest as we always wish for more, even myself, but self-containment isn’t necessarily about possessions and wealth. Self-containment is captured in the Turtles to remind us to be true to ourselves, to contain our envy, to remember to be free enough that we can move ourselves if we wish too. It is about discovering who you really are, the feelings trapped so deep down inside you.

If one trusted themselves totally and learnt to live in some form of harmony within themselves, they would do like Gandhi did. Many since Gandhi have tried to find themselves but nobody has been that successful since; many humans have tried and then they have become disheartened so have thrown it away.

Gandhi was an Icon, he wasn’t quite of this world – his message was for the Universe and the Universe isn’t so much the starry planets of the distance, but the Universe is what we all hold inside ourselves. Gandhi’s feet were stuck here on this earthly soil, but his soul was a universal soul that spread everywhere; and Gandhi was like the Turtles that we enjoy watching as Gandhi’s soul was carried around his body for all to see.

Next time you sight a Turtle, watch how their little flipper feet move. Watch how they swim – it’s all forward movement isn’t it!!!! Turtles are so much fun to watch, and this is their message to all that one must ‘move forward’. I am not talking about grabbing and taking it all but moving forward in oneself so that our souls become our being and that we don’t harbour great weights on our back or carry our burdens with us.

People sight the Turtle’s shell on their backs and wonder about the burden the Turtles must live with every day carrying this great weight on their back, but the Turtle’s heart is free of burdens and their shell is weightless to their little body that lives inside their soul.

This is the special message of the Turtles, it isn’t so much about themselves being a unique animal but what they foster, and it is so evident if one looked. If we all tried to be like the Turtles wouldn’t life be better? Wouldn’t the Universe surface for all of us? Wouldn’t our soul capture us rather than being contained within us?

From Northern White Rhino: Goodwill is the Energy of 2019